How could you make a girl’s birthday more special than inviting a fairy to the party and playing some magical fairy games. Little girls often wonder if fairies are real and my four year old daughter was convinced that at a recent party the fairy entertaining the kids there was real. Kids love make-believe things & fairy parties and games are great for that. Often you only need a magical fairy wand to get their imagination going. Some of the games to play at a fairy party include:

I like the idea of having a ‘high tea’ style morning or afternoon tea for a fairy party with cupcakes which can be one of the packages offered by The Sparkly Fairy. 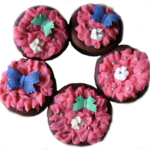